In a paradoxical situation, as we are encouraged to stay at home and somewhat take on a state of hibernation, Whistler’s most iconic furry friends are doing the opposite.

Michael Allen’s name is synonymous with bears in Whistler, not only because he’s been tracking them since 1992, but because he shares his findings with the community and visitors in a way that better connects us to these iconic, Canadian animals.

“Passing on information from what I collect about bears is important to me,” explains bear expert and naturalist speaker, Michael Allen. “Their abundance is a brilliant indicator of environmental change.”

Allen grew up in the West Kootenays and has always had a fascination and reverence for the bears and big cats who also called the area home. After noticing that the conservation status of black bears was low in BC and that there weren’t many studies being done he decided to make them his focus.

His sister, a teacher in Whistler, mentioned that there were lots of black bears in the valley and that’s all Allen needed to hear.

“They are one of the most resourceful large mammals on the planet,” explains Allen. “From omnivore-adapted dentition (a combination of sharp front teeth and molars for grinding) to large body design and cognitive strategies, they are a super adaptive animal that can sustain itself on a highly diverse diet. They can survive half a year with no food and have strategic long-memory plans to rely on for surviving shortages in their natural food supply. Watching a black bear’s response to extreme scales of climate and shortages in berries and salmon is key indicator of how the natural world is changing.”

Wildlife tracking is not a glamorous business and Allen often found himself at a small dumpsite (where Cheakamus Crossing now is), in skunk cabbage swamps, prickly berry patches and on steep ski slopes in order to get photographs of bears so he could identify them.

He studied their colouring, body morphology, neck and chest markings, and if they had new or old injuries – the key was good photography and a keen eye. 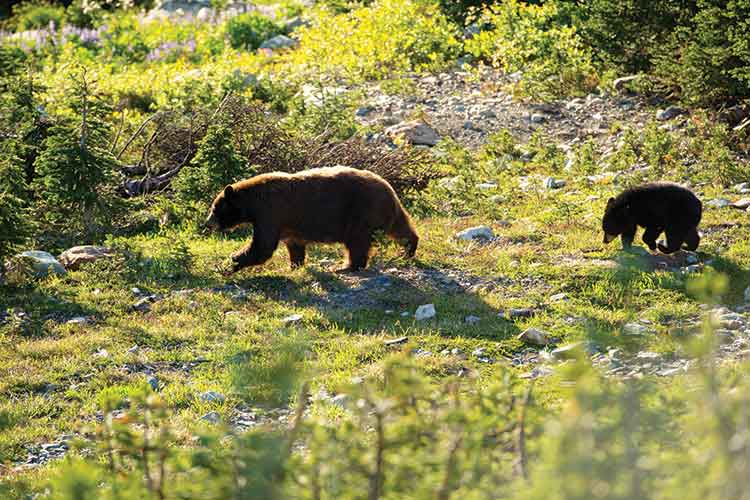 A cub follows its mother as they search for food. If the mother senses danger, she will instruct her cub (through grunting sounds) to climb a tree. PHOTO MIKE CRANE

Allen discovered that one of the best times of the year for photographing the bears was during April and May when they frequented the golf courses for the tender grass, clover and dandelions (much to the shock of the golfers).

Note: The golf courses do not allow non-golfing bear-viewers onto the greens and speak to the golfers about the bears before they head out for a round.

In 2000, Allen began to guide bear viewing tours on Whistler Blackcomb and used the systematic timing of the tours to count resident bears including mating pairs and cubs. In 2010 he began using motion (day) and thermal (night) remote cameras to reduce human disturbance and expand his research radius. 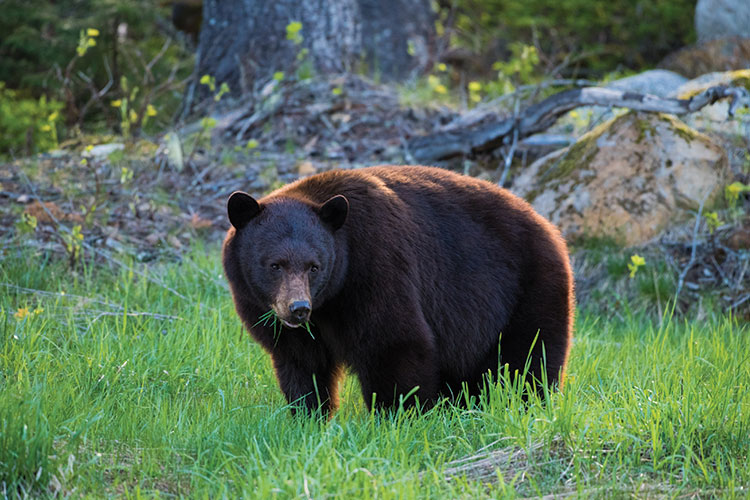 Bears need to consume around 20,000 calories per day – that’s a lot of clover and berries. PHOTO MIKE CRANE

Allen no longer guides tours (after 19 years), but he still monitors 70 areas in Whistler and Squamish in order to identify and track bear numbers to report on their health and abundance.

Today, his tracking shows that Whistler has at least 30 males and 18 females, nine of which are immature bears (two – three years old). This gives Whistler a total of 48 black bears.

“Immature bears are difficult to census because they avoid confrontations with older, larger bears and often occupy less productive habitats to do this,” explains Allen. “It was a low cub year in 2019, with only four cubs counted. A female bear usually produces cubs every two years, so in 2020 we will likely see a rise in cubs as most females were breeding last spring.”

The areas Allen uses to sample bear activity are Cheakamus Crossing, Whistler and Blackcomb Mountains, and the Fairmont Chateau Whistler Golf Course. He comments that these areas are historic travel corridors through seasonal feeding areas, which provide a window into overall bear abundance.

“Female bears maintain small spring breeding ranges, whereas male ranges are larger and encompass many female ranges in spring for breeding through June,” says Allen. “Bears move across their ranges in response to the availability of food and mates, while trying to stay safe.”

Allen’s outreach to the community, as well as the work of the Resort Municipality of Whistler and Whistler’s Get Bear Smart Society, helps to keep Whistler bear conflicts to a minimum, but it’s an ongoing battle and everyone has a role to play in keeping them safe.“I am not a scientist. I cannot leave a legacy of scientific papers but, I can spark the younger generation into believing black bears should be an integral part of management in our shared landscape,” says Allen. “I’ve always considered the life of bears much larger than my life, so it’s pretty cool to follow individual bears over long periods of time and witness their life.” 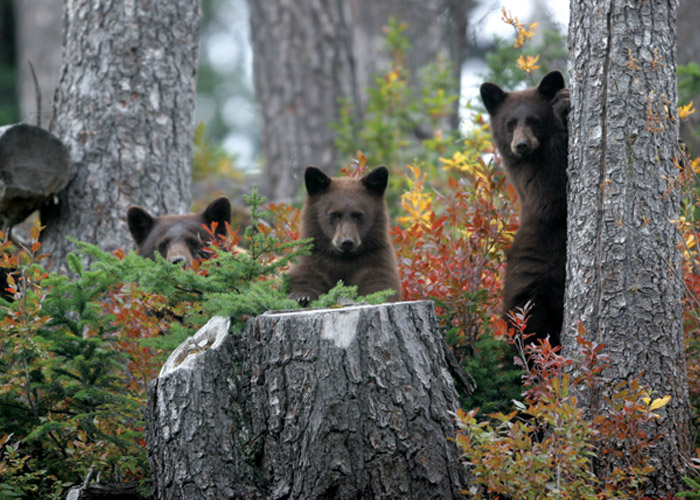 Although they might be called Black Bears, they can actually be shades of black, brown and white. PHOTO MICHAEL ALLEN

How to Be Bear Aware

For more details on what to do if you encounter a bear, visit Get Bear Smart Society.

Bear viewing tours are the safest way to see Whistler’s black bears and learn more about them.

The bears will be here waiting to lift a curious nose in your general direction when we’re back to normal operations.

Until then, here’s a little gallery of bear shots from the mountains – see you soon!